This township was formed from territory taken from Hepburn and Plunkett's August 9, 1843.  Its name was given to it on account of the many little cascades and waterfalls found in its dashing streams and murmuring rivulets.  It is the sixth township in size in the county and has 29,800 acres. The census for 1890 gives the township a population of 609.  It is bounded on the east by Sullivan county and Plunkett's Creek township, Lycoming county, on the north by McIntyre, on the west by Lewis and Gamble, and on the south by Eldred and Plunkett's Creek. 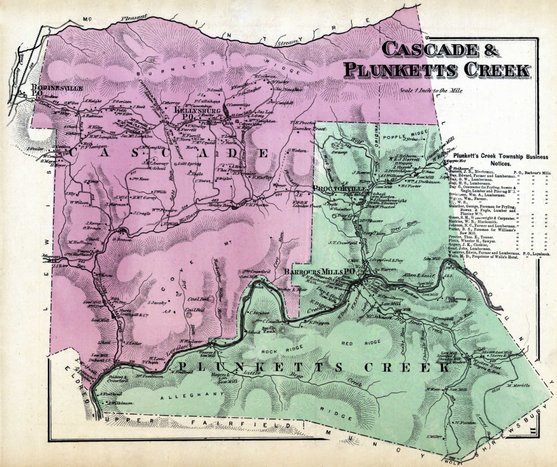 Burnett's ridge, which was designated as a line at the Indian purchase of 1768, sweeps across the township into Sullivan county. It begins below Bodines on Lycoming creek. This ridge is a famous landmark of early times and possesses more than ordinary historical interest. Its name was probably given to it in honor of William Burnett, who flourished in the, reign of William and Mary, and succeeded to the government of the Colony of in 1720. Stone, in his Life of Sir William Johnson (Vol. I, page 30) says that with the exception of Colonel Dongan, his Indian policy was marked by the most prudent forecast and the greatest wisdom. He became a great Indian trader and built a fort at Oswego for the protection of his agents and stores from the French.He commanded the respect and enjoyed the full confidence of the Indians. There is little doubt that this ridge was named after him on account of some incident or circumstance to us now unknown.

Cascade consists of Red Catskill (No. IX), which forms an elevated valley some 1.600 to 1,700 feet above tide, and embraces the greater part of the township. On the north and south edges there are ridges of Pocono rock (No. X), some of which are capped by Mauch Chunk red shales (No. XI), and some areas of Pottsville conglomerate. There are many good and well cultivated farms in the township.

The mineral deposits are not much known, not having been exploited. There are deposits of copper shale reported of sufficient thickness to invite further attention. The surface of the township is mostly within the Allegheny mountain plateau and consists of a mountain valley between two ridges. The moraine appears on Slack's run, where a drift hill extends across the valley and rests against Burnett's ridge, showing very distinctly strong glacial action.

First Settlers. - Michael Kelly, who penetrated the forests at the head of Wallis run in July, 1843, was the first settler in the fastnesses of Cascade. He cut a road through the woods from DuBois's saw mill, on Lycoming, to the present Kellysburg, six miles, so that he could get an ox team and wagon. through. This was the first road in this part of the county and over it Mr. Kelly hauled the lumber used in the construction of his log house, and also moved his family in by the same means. In October of the same year he was followed by a Mr. Lang, of Philadelphia, who purchased the property and erected the buildings now owned by Peter O'Connor. The next few years he was followed by Patrick Cummings, Bernard, Thomas, Patrick, and Edward Norton, Lawrence Ging, Michael Kehoe, Jeremiah and James Lee, John Smith, Thomas Noon, Michael Cox, William McEnarney, George Nevell, William and John Davis, Henry Riley, Samuel Stall, James Condon, John and Joseph Keefer, Thomas Logue, Patrick Flanagan, Thomas and Patrick Kinney, Michael Barry, John and Patrick Davis, Matthias McDonald, William O'Brien, Peter O'Connor, Richard Farrell, and others. Each purchased a property and erected buildings.

In 1845 John and Matthias DuBois rented a mill seat and water power from Mr. Kelly and erected a saw mill on it, in which they placed a pair of buhrs to do the grinding for the settlement. At that time grist mills were scarce and the settlers in Plunkett's Creek township and Fox township, Sullivan county, cut paths through the woods and brought their grain on horseback to that mill to be ground. In 1852 the mill took fire from a hot journal and was burned. Its loss was so severely felt in the settlements that Mr. Kelly was induced to rebuild it in 1858. A few years later he converted it into a circular saw mill and manufactured lumber on it until 1873, when he erected a large steam mill and continued in the lumber business until the spring of 1877, when he quit the lumber business and moved to Kansas, where he died in 1883.

Kellysburg. - The settlement founded by Michael Kelly nearly fifty years ago is now known as Kellysburg. He was an active, enterprising man, and through his efforts aided largely in reclaiming what was a wild and inhospitable region. Some of his descendants still reside there. Michael Kelly was the Democratic nominee for sheriff in 1872, and after an exceedingly bitter and exciting campaign was cruelly defeated. The blow was such a severe one that it seemed to break his spirit, and as soon as he could dispose of his property be left the county and located in the new State of Kansas. And so ended the life of the brave, hardy enterprising, big-hearted pioneer of Cascade.

The only postoffice in the township is at Kellysburg. It was established July 25, 1866, and Michael Kelly was appointed postmaster. He served until January 10, 1878, when be was succeeded by Mary Kelly. She only served eighteen days, when, on January 28, 1878, she was succeeded by Mary A. Kelly, the present incumbent. It will be seen that a member of the Kelly family has held the office from the beginning, a period of twenty-six years.

The descendants of the first settlers of Cascade have proved themselves honorable, talented, progressive, and worthy citizens.

St. Mary's Catholic Church is the only church in the township. As early as 1848 Catholic services were hold in the houses of Michael Kelly and John Keefer by Fathers O'Keefe, Hannigan, and others. Nearly all the first settlers of the township were members of this faith, and attended Mass whenever the opportunity offered. In 1854 a small frame building was erected on the farm of Patrick Kinney, who donated land for a church and cemetery. It stood a couple of miles Southwest of Kellysburg, and served the congregation until the erection of the present church. The lumber was given by John and Matthias DuBois, and Levi Hartman was the carpenter. In 1878 the old church was removed, and the present one erected on the same site by Father Dunn. It is 40x80 feet in dimensions. Edward F. Noon was the builder. St. Mary's is a mission, and has always been in charge of the pastor of an adjoining parish. It embraces seventy-five families, and is the only congregation and house of worship in the township.